Are You Making These 6 Mistakes When Networking For Your Biz? 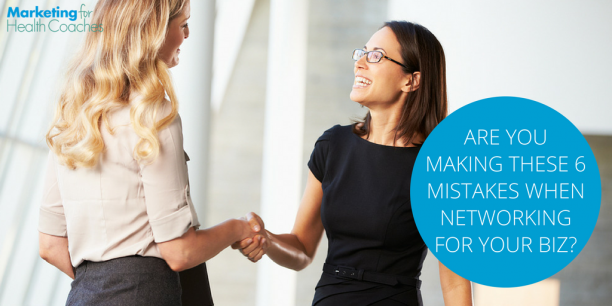 When I was a new health coach, I used networking events to meet other health and wellness practitioners who might make good referral partners or want to host me for a speaking gig.

One of my big wins was meeting the owners of a busy acupuncture clinic who hosted me for multiple talks and referred clients to me. This really helped boost my business!

In today’s online world, networking often gets overlooked. It doesn’t seem as “sexy” as other strategies.

You might think that online marketing will be easier and faster than networking, but it’s actually the reverse.

Whether you’re using networking events to meet referral partners, or to find clients directly, it can be one of the fastest and most effective marketing strategies.

A lot of people absolutely dread networking. They’re worried it’s going to be stuffy, corporate, awkward and – most of all – a giant waste of time.

Although networking gets a bad rap, I believe it is easily one of the best strategies you have to expand your business.

But there are a lot of mistakes that can completely derail your efforts.

These are the biggest mistakes I’ve seen people make when it comes to networking for their business. 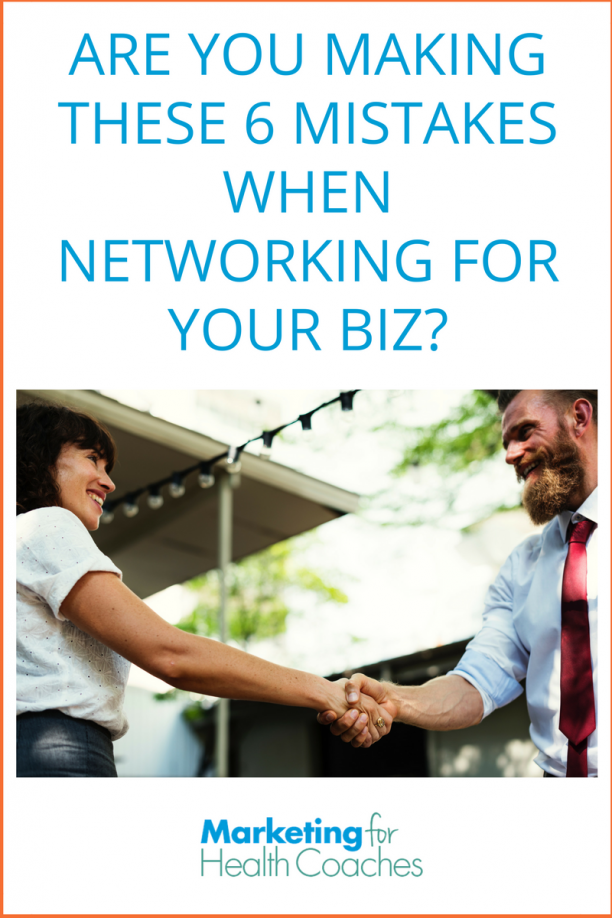 Have you ever met someone at a networking event (or anywhere for that matter!) and walked away having absolutely no idea what they do?

Maybe they were too vague or used way too many buzzwords to describe themselves.

Whatever the case, if you didn’t understand what it is that they do, you likely didn’t follow up with them or form a mutually beneficial relationship, right?

That’s why describing what you do at networking events is so important. When you meet someone new and they understand exactly what problems you help people solve, they can start referring clients to you or mention other opportunities that might be a good fit.

If you just say “I’m a health coach”, they won’t know what kind of clients you’re looking for.

If you say “I’m a health coach, and I work with women who are having trouble conceiving boost their fertility” then your new acquaintance knows exactly who you help.

When practicing your intro, focus on who you help and the specific problem you solve. You can even try asking a few friends if it gets the point across.

Walking up to strangers and starting a conversation out of thin air can be intimidating.

But if you go to networking events and don’t talk to people, then networking is wasting your time.

If you’re more introverted (like me) there are simple ways to make the first move.

A super easy way to start a conversation with someone is simply by saying “Hi, I don’t think we’ve met yet,” and take it from there. Remember, everyone is there to meet people just like you are!

Making It About You

Have you ever been to a networking event and met someone that only talks about themselves?

They might have tried pushing their services on you, or they went into a lot of detail about what they do. Either way, you probably walked away from the conversation without having said 5 words.

Now, I’m sure you would never completely monopolize the conversation, but it’s important to remember to focus on the people you’re meeting – instead of focusing on yourself.

Build real connections by asking them questions and being genuinely interested in what they have to say.
More important than talking about yourself is demonstrating how you can be helpful. When you do this, they’ll want to do the same for you.

Trying to attend every event

If you’re feeling eager about getting your networking on, or you’ve had some success with networking in the past, it can be tempting to attend every networking event possible. Hitting more events means meeting more people, which means faster results, right?

Well, maybe. But you run the risk of burning yourself out if you go too hard. This is especially true if you’re on the introverted side. Plus, if all of your time is spent at events, you won’t have any time left to follow up!

I learned this the hard way!

In the early years of my health coaching business, I did a lot of networking. Overall it was very helpful for my business, but there was one group I attended that drained my energy and proved to be a waste of my time. It simply wasn’t a good fit for me and my personality.

Looking back, I just needed to work smarter (not harder) and focus on 2 networking groups that I enjoyed being a part of that helped me grow my business.

When it comes to networking groups, shop around. Find a couple recurring events that are a really great fit for you and attend them regularly.

Not following up in a timely manner can completely kill the connection, making the time you put into meeting people unproductive.

Instead of losing the connection, be sure to get business cards or exchange information and follow up with a friendly email the within a week.

Focus on 1-2 people who seem to have real potential as either referral partners, collaborators, or clients, and invite them for a coffee meeting.

Not all networking has to take place in a formal, organized group setting. Plenty of organic opportunities likely present themselves in your life every week – you just have to look for them!

Organic networking is networking you do as you go about your normal activities. When you’re talking to your neighbors, your coworkers, people at the gym, or other parents at the playground, find natural ways to talk about what you do and who you help.

It’s a time-efficient (and fun) strategy because it allows you to spread the word about your business without adding much extra to your plate.

Avoid these common mistakes and you’ll be a master networker in no time! And remember, the first few times you go it might feel challenging, but the more you go and the more you practice the easier it will become.

It’s time to get out from behind your computer and make face-to-face connections!

Now I’d love to hear from you
Which of these tips do you want to implement in your networking strategy?

Would you like to receive weekly emails, where I break my favorite strategies into simple, actionable steps that can help you grow your online business?

Learn how to create buzz about your programs, even if you have a small list or a list that is unresponsive.
FREE Webinar
Thursday, January 15th, 2015
10 am Pacific / 1 pm Eastern
Claim My Spot Now
Almost there: please complete this form and click the button below to register.
Just Enter Your Name and Email Below To Get Register for our FREE Webinar "How to Get People Enrolled in Your Programs,
Even if You Don't Have a Big List". 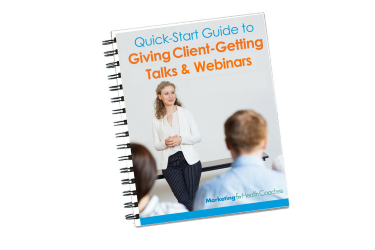 I know that marketing is an area that scares many health coaches. After all, you started your business to help people and truly make an impact on their lives, not to become a marketing guru.

During the program, we’ll spend a lot of time talking about how to effectively market your business. I want to make it easy for you to implement what I share.

That’s why I’m including these Done-for-You Marketing Materials as part of this program. No need to start from scratch. You can make some minor edits and be ready to roll!

Sequence of 7 Emails Designed to Turn Your Subscribers into Clients.

This Page will Help You Promote Your Free Gift & Grow Your List.

“Starter” marketing scripts and templates you can use in a variety of situations.

There is so much to know when it comes to marketing and growing your business successfully. We’ll cover a lot of content during our two virtual retreats, but there will be elements that we don’t touch on.

That’s why I’m also including a Library of Trainings that you can access at any time.
Pick and choose and go through the trainings you need, when you need it.

You can use our private community and group coaching calls to ask any questions you have about implementing what you learn in these trainings.

How to Protect Yourself Legally as a Health Coach

How to Approach Corporations

How to Give Talks & Webinars That Get You Clients

What you get with our Ready-to-Launch Cleanse Program

All 4 Seasons of The Cleanse/Detox Program

Feeling stuck about what to offer and don’t have time to put something together?

I want to help you get unstuck and free up the time you may be spending creating content and preparing for client sessions, so you can “get out there” and attract more clients.

That’s why I’m including these fully customizable and brandable Done-for-Your Programs.

Both of these can be delivered as one-on-one coaching, group coaching or online coaching programs. 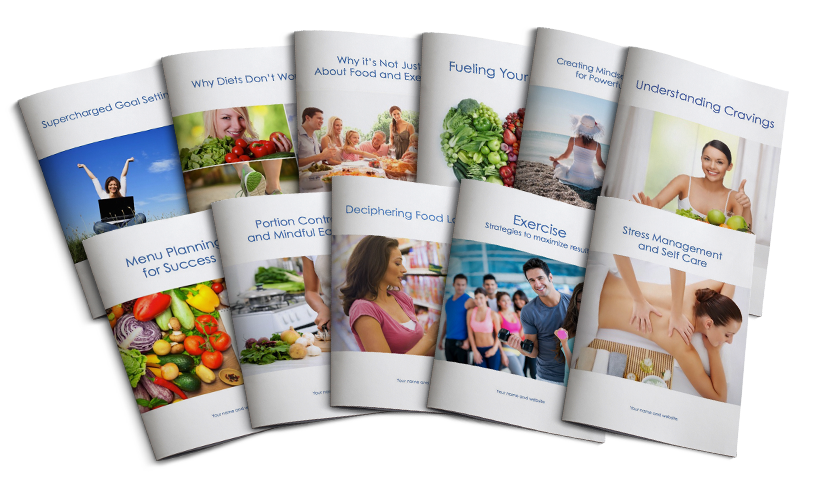 Use this program to offer a 6-Month program or two
3-Month Programs.

Includes everything you need to lead this program, including 12 sessions you can lead for a one-on-one coaching program. You’ll also receive these workshop-style sessions in Powerpoint format that you can use as ‘modules’ for an online course or program.

You’ll receive 24 detailed support emails (two per session) and a step-by-step coaching guide with the strategies you need to get your program up and running with confidence and ease. 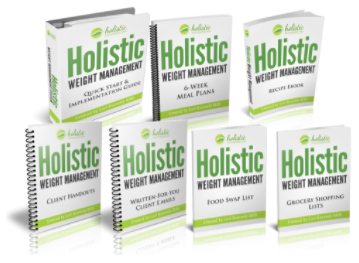